I Now Feel Part of The Community 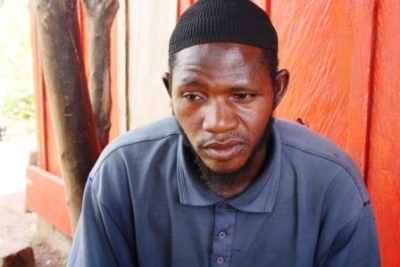 One moment he was weeding, the next he was bound by ropes. For the few days prior, Alhassan Mohammed had been experiencing symptoms of malaria, with a high fever. Then, he suddenly became violent, and was tied by his friends. They proceeded to bring him back to Tamale, where he was secured with shackles. His family, worried that either he would hurt someone or someone would hurt him, kept him restrained. He often consented to this treatment, seeing the reason in their action, but at times the situation caused him physical pain, and he asked, futilely, to be removed.

When he was free, he often wandered around Tamale, sometimes conscious, sometimes not. On one occasion, he insulted a young footballer. Incensed, the man dragged Alhassan to the barracks, where he was violently beaten by the soldiers there. He was totally defendant. Instances such as this caused Alhassan to feel a great deal of frustration with his condition. The treatment he received was totally undeserved, since he never personally hurt anyone.

Once, Alhassan stumbled upon a local mosque, where a man working with BasicNeeds met him, and immediately recognized his condition. He organized several men to take him to the hospital where he was diagnosed with schizophrenia. While in the hospital, he became violent again, and was restrained by the men who brought him. From his first psychotic episode, until the day he received medical treatment, two years passed. During that time, he visited at least four traditional healers, without any improvement. While suffering from his condition, he would often go days without eating food. Most of his friends abandoned and shunned him. The two plots of land he owned were sold to pay for his treatment.

However, as soon as he began to receive medication, Alhassan’s behaviour greatly improved. There was light. After a few weeks in which he didn’t exhibit any symptoms, his family permanently loosed his chains. He began to reintegrate, starting a bicycle repair business with the help of a loan from the Amasachina Self-Help Association. He was grateful for the opportunity to earn an income: “I now feel part of my own community.” Today, his business is flourishing, with the demand for parts occasionally exceeding his supply. Many of his friends have now reaccepted him, and are willing to associate themselves with Alhassan. His connections with BasicNeeds have provided another avenue for support. He has overcome the monstrous obstacle placed before his life, and has been without symptoms for ten years.