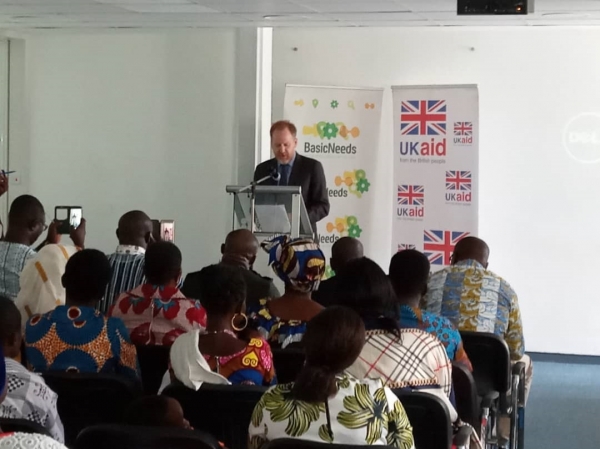 BasicNeeds-Ghana has re-launched the UK aid funded Maternal Mental Health project during a well attended ceremony at the British Council in Accra on November 28, 2018.  The five-year project, titled “Enhancing Maternal Mental Health of 29520 pregnant women, mothers and their children to realise maternal and child health in Ghana”, seeks to improve the maternal and child health of poor and vulnerable pregnant women and new mothers and their children as a way of improving their quality of life.

The high-level event was attended by the Country Director of the UK Department for Internal Development (DFID), Philip Smith, the DFID Health Sector Advisor, Luisa Hana, the CEO of the Mental Health Authority of Ghana, Dr. Akwasi Osei, the Deputy Director, Public health of the Greater Accra Regional Directorate of the Ghana Health Service, Dr. Luiz Amousou and the Greater Accra Regional Director of Health Services, Dr. Charity Sarpong. Other dignitaries in attendance were Health Directors and Public Health Nurses from six (6) Districts where the project is to be implemented. Mental health service users from Accra and its environs were also present at the event.

The Executive Director of BasicNeeds-Ghana, Peter Badimak Yaro, in his welcome address, gave a general overview of the Project to participants. He said said the main target of the project was to enhance the Maternal Mental health of pregnant women and mothers in five selected regions namely, Upper East, Upper West , Brong Ahafo, Northern region and Greater Accra Regions. He added that the project was also expected to improve livelihoods of poor and vulnerable pregnant women and new mothers with mental health issues. He further informed the alliance members that Traditional birth attendants will be trained as part of the project to refer pregnant women at risk of complications during pregnancy.

The CEO of the Mental Health Authority of Ghana, Dr. Akwasi Osei, said women are usually affected by mental ill-health during their reproductive years. He cited several instances where women had been reported to dump their babies after delivery due to post-partum depression. He said it was unfortunate that society continued to describe such visible signs of mental illness as wickedness on the part of women without supporting them to seek appropriate treatment.

The DFID Country Director, Philip Smith, in his address before officially launching the project, said he was pleased to launch the BasicNeeds-Ghana Maternal Mental Health Project. He said “this important project – £940,000, part of a £1.2 million project, has been granted to BasicNeeds UK to work with BasicNeeds-Ghana and three other NGOs to deliver the project. It aims to raise attention to a little recognised, but important issue that pregnant women and new mothers experience.” He underscored how the pressures and stresses of life could especially affect the mental health of pregnant women and new mothers during a time when such women and their families should have been experiencing the joy of new life. He, therefore, hoped that BasicNeeds-Ghana would receive all the support from stakeholders to make the project make the difference it was intended to achieve.