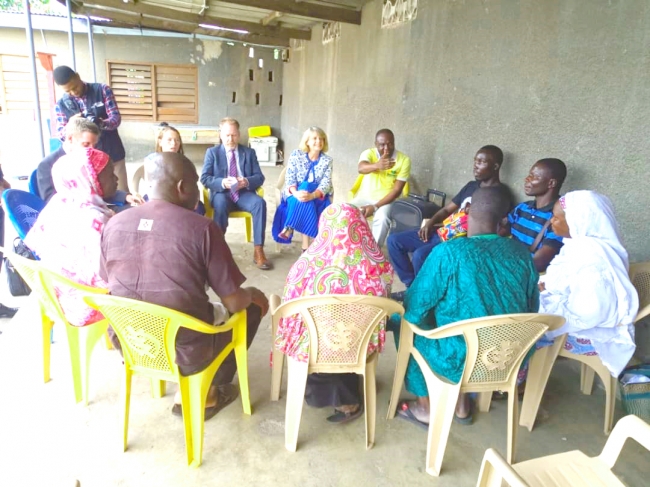 The United Kingdom’s Minister of State for Africa, Mrs Harriet Baldwin MP, took time off of her busy schedule to visit a self-help group (SHG) of people with mental illness or epilepsy and their care-givers at the Nima- CDR Community Social Center during her working visit to Ghana on August 28, 2018. This peer support group and several others are among self-help groups supported by BasicNeeds-Ghana with funding from UK aid.

The Minister undertook the visit in the company of the British High Commissioner to Ghana, His Excellency Iain Walker, Country Director of DFID for Ghana and Liberia, Philip Smith, and Team leader for Social Sectors at DFID Ghana, Jemima Gordon-Duff. Also present was the Executive Director of BasicNeeds-Ghana, Peter Badimak Yaro. The Minister’s visit to Ghana marks is her first since her appointment to the office of Minister of State for Africa at the Foreign and Commonwealth Office and Minister of State at the Department for International Development on January 9, 2018.

Despite her scheduled engagements with several high profile personalities in the country including the President,  His Excellency Nana Addo Dankwa Akufo Addo, the Minister of Trades and Industry, Hon. Alan Kwadwo Kyeremanteng and a visit to the Blue Skies factory, Mrs Harriet Baldwin made time to visit members of the Nima self-help group of people with mental illness or epilepsy and their caregivers. She held brief interaction with some mental health service users where she learnt about their experiences  as people living with mental illness, paths to treatment, their involvement in the peer support group and the benefits they have derived thereof. The members unanimously agreed that their participation in the self-help group had aided their recovery and enabled them to take control of their lives. They also stated that with support from BasicNeeds-Ghana, their capacity had been strengthened to advocate for themselves and fight against stigma and discrimination.

The Minister and her entourage, who also visited Zelia Osmanu, a mental health service user and a beneficiary, at her onion store located at the Nima Market, were touched by the stories from mental health service users and their care-givers. The High Commissioner, Iain Walker said ”it is tremendous to see how those in the group have taken control of their lives with support from BasicNeeds”. Executive Director of BasicNeeds-Ghana, Peter Yaro, thanked the dignitaries and entreated them to convey to the Government and people of the United Kingdom the gratitude of people with mental illness or epilepsy and their caregivers in Ghana who have immensely benefited from UK aid’s investments in mental health development in Ghana.