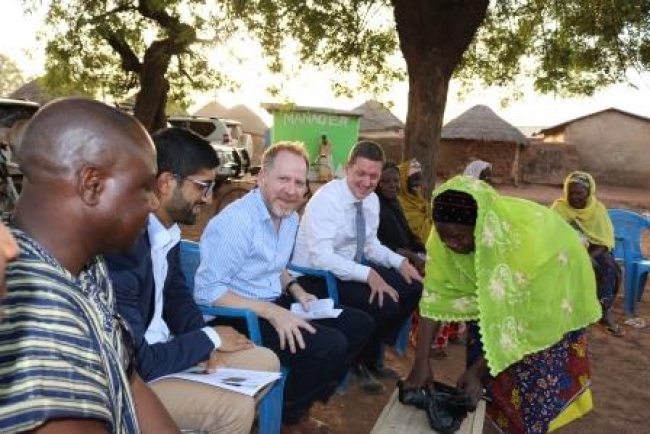 UK High Commissioner to Ghana, His Excellency Iain Walker, yesterday February 7th, visited mental health and epilepsy service users and their primary carers in the Tolon District of the Northern Region of Ghana. The visit was facilitated by BasicNeeds-Ghana and its implementation partner in the Northern Region, Gub-Katimali Society (GKS). The High Commissioner was in the company of Philip Smith, Country Director for DFID UK in Ghana and Liberia based in Accra, among others.

This visit, which is the High Commissioner’s first time of interacting with any BasicNeeds-Ghana facilitated self-help group (SHG) of people with psychosocial needs since assuming office, afforded him the opportunity to interact with the self-help group members and to see for himself the impact of his government’s investments in their lives.

The SHG members, who were obviously delighted by the visit, took turns feeding back to the High Commissioner’s team. They briefed the High Commissioner on how their membership of the group had improved their health seeking behaviour and given them an avenue to openly talk about the issues which affected them. They likewise showcased some of the wares they had been equipped to produce.

The High Commissioner, who was visibly impressed, noted his appreciation to the group for making time to wait and meet with him and his team. He stated that he was encouraged by the fact that the contributions of his government was bringing about real and positive changes in the lives of people with mental health needs in Ghana.The DFID Country Director, on his part, expressed his appreciation to all those who had contributed in ensuring that the Tolon SHG was active and vibrant.