They Can’t Tell That I am Ill 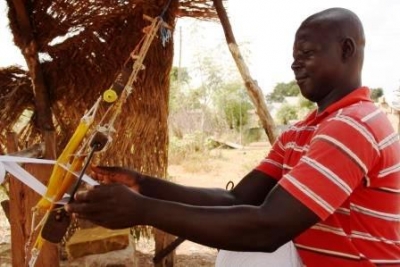 Alhassan sits under a thatch covering, sheltered from the sweltering afternoon heat, deftly passing the shuttle back and forth through the warp. The Kente cloth is gold and white, representing royalty and festive occasions. An apprentice works quietly at an adjacent loom. To a passer-by, Alhassan appears to be a hard-working young man. And he is. Trained as an adolescent in weaving, Alhassan has used his skill to support himself all the way through post-secondary school training in nursing. Now, he has five apprentices, and is waiting for his nursing posting.

It is inside the security of his room that he reveals to us what is behind the façade. How the medicine he takes isn’t simply a dietary supplement. The apprehension of crowds not innate. The advocacy for the mentally ill not born of compassion. Alhassan is epileptic. Since his childhood, he has battled against the condition, attempting to maintain a semblance of normal life. Due to the effectiveness of his medication, and his devotion in taking it, he successfully hides this reality from the surrounding community for fear of stigmatization.

He recalls his first seizure: he was running around with friends, when all of the sudden his left hand began to shake. Confused, he ignored the sensation, and returned to play. Later, he woke up courtesy of a bucket of water. Thankfully, some of his friends had carried him home from the Arabic school he was attending, but most of them ran away when the seizure began, fearing it to be contagious. Right from the onset, Alhassan felt stigmatized.

A dispute ensued between his family, who considered Alhassan to have epilepsy, and a local healer, who claimed he has having convulsions. As a result, he began to receive traditional treatment. After a period of time, which yielded no improvement, Alhassan travelled to the local hospital to receive medication for epilepsy. The pills began to relieve the seizures until the hospital changed him to a different pill, which failed to suppress the seizures. He subsequently returned to the hospital in an attempt to obtain the proper pill and dosage. Due to some complications in attaining the pills for the hospital, Alhassan chose to purchase them himself from a pharmacy, which he still does today.

Throughout the early stages of his epilepsy, his nuclear family constantly supported him. While others stigmatized and distanced themselves, his family remained at his side. They didn’t view the condition as contagious, as many other people did. Alhassan reflects: “We lived happily together.” Even today, his family checks-in on him regularly to ensure that he has enough medication.

Fuelled by his family’s backing, Alhassan completed Secondary School and proceeded to his education. All the while, he continued to work and contribute financially to his medication and education. He took his pills daily, and was free from any seizures. As a boarder in school, his method of self-medicating was invaluable. Prior to the medication, Alhassan experienced seizures once every few months. While consistently taking his medication, Alhassan has yet to experience a seizure. He says that he “doesn’t joke” with the medication now. Everywhere he goes, he carries his container with pills in it.

Personally, this period of his life was relatively free from seizures and stigmatization. However, he witnessed another instance of stigmatization among his colleagues at nursing school. A classmate had a seizure, and everyone ran away from him. Afterward, some distanced themselves from the man. Alhassan stepped in to comfort his colleague, and reprimand the others for acting inappropriately. Eventually, the ignorance was addressed as they all received psychiatric training within the program.

When he arrived in his current community in 2006, his father advised him to keep his condition secret by taking his medication in private, in an attempt to avoid any of the poor treatment Alhassan had so frequently observed. The counsel proved prudent, since Alhassan has witnessed many instances of stigmatization against other members of the community. People often run away if someone has a seizure, believing that it might be contagious, and jump to their body. They are hesitant to share anything with those people, and even won’t eat with them. As a trained health assistant, Alhassan has the platform to advise his community on proper care for the epileptic. He encourages them to rush to someone having a seizure, instead of fleeing. He also interacts with those in his community suffering from epilepsy, advising them to attend self-help group meetings and take medication. Though people listen to him, Alhassan still does not feel comfortable revealing his identity; “They only see that I take medicine every day, but they don’t know me.” It is unlikely that Alhassan will ever open up, unless there is a considerable shift in the perception of epilepsy within his community, and Ghana as a whole.

On top of these social obstacles, Alhassan also faces a set of physical limitations. He cannot engage in hard physical labour without experiencing a seizure. If he beings to work vigorously, he will need to take a moment to rest, to prevent an attack. Additionally, he cannot join large crowds of people. This reality is the most devastating for Alhassan; he wishes that he could join his friends if they were getting together and shouting.

Despite these challenges, Alhassan maintains ambitions for the future. He will soon receive his posting to a hospital or clinic around the Northern Region. He needs to fight to stay near Tamale, so that he can access his medication. Alhassan currently attends BasicNeeds’ self-help group in Tamale, and has greatly benefitted from it. Interacting with other epileptics has opened Alhassan’s mind to new ideas and possibilities. The meetings, especially the interactions with others who have overcome their condition, have empowered Alhassan, Today, Alhassan serves as one of those unofficial leaders. In the face of physical limitations, intense prejudice, and medical complications, Alhassan’s story is quite remarkable. A nursing school graduate, weaving to support himself and five apprentices, advocating for justice and equality. He is an inspiration.