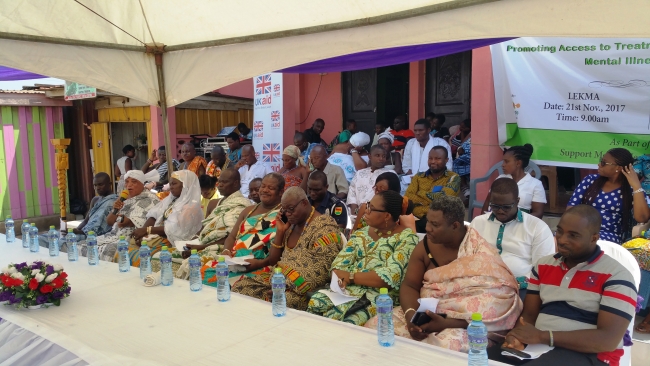 BasicNeeds-Ghana, in collaboration with the mental health staff of the Ledzokuku-Krowor Municipal (LEKMA) Hospital held a durbar to sensitise the Chiefs and people of the Ga-Dangme Traditional Area. The durbar, funded by UK aid, was held on November 21, 2017 and was graced by the the Wulomors of the Ga-Dangme Traditional Area as well as their Mankralo and other eminent chiefs and elders of the community.

Other dignitaries in attendance were the resident Clinical Psychologist at the LEKMA Hospital, Mrs Leticia Charlotte Myers – who chaired the durbar – and officers from the LEKMA Municipal Health Directorate.

In his welcome address, Fred Nantogmah of BasicNeeds-Ghana thanked the participants for acknowledging the invitation of BasicNeeds-Ghana. He expressed his optimism that the durbar would contribute towards improving people’s attitudes towards issues of mental health and people affected by it. He stressed on the need for traditional and spiritual healers to collaborate with mental health professionals in the provision of mental health care to those who patronize services of non-formal mental health service providers. He further added that chiefs and other opinion leaders in the community should show leadership by openly promoting and protecting the rights of people with mental illness and epilepsy and other vulnerable groups in society.

The Greater Accra Co-ordinator of Psychiatric Services, Etornam Gblede, commended BasicNeeds-Ghana for its support to mental health in Ghana since 2002. He informed the gathering of the available mental health treatment centres in the LEKMA area and at other nearby places. He impressed on the chiefs to make strong statements of their commitment in support of mental health so as to encourage the improvement of mental health in the Ga-Dangme Traditional Area.

In a statement read on her behalf, the Municipal Director of Health Services at LEKMA thanked BasicNeeds-Ghana for the continued support the organisation has given the district’s psychiatric unit. She indicated that all the Specialist Psychiatric Outreach Clinics in the area had been conducted by BasicNeeds-Ghana, thereby ensuring that people with psychosocial needs in the area got specialist treatment at least once every quarter.

When it came time for commitments, the Chiefs of the Ga-Dangme Traditional area were unanimous in affirming that mental health issues were issues that should concern everyone. They each pledged their strong commitment towards ensuring that the rights of people with mental illness and epilepsy would receive.

The Chair of the occasion, Mrs Leticia Myers, remarked that the turnout for the occasion was testament of how seriously the chiefs and people of LEKMA had taken issues of mental health. She indicated that speaker after speaker as well as the drama display had stressed one point – the need for prayer camps and traditional healers to refer people with mental illness to the hospital for management. She concluded by entreating all participants to ensure that the message they had heard would be broadcast and used to influence their families and neighbours positively.