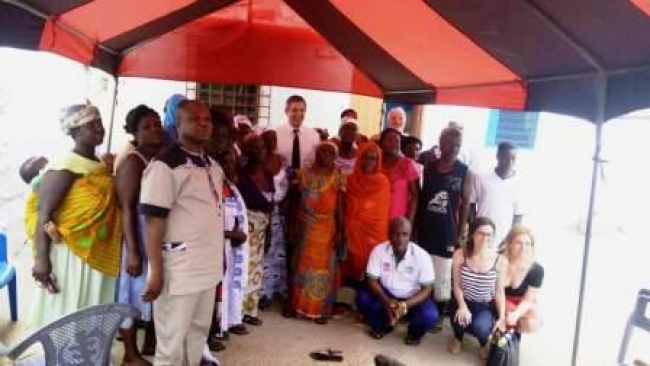 An EU Delegation, led by the European Union Special Representative on Human Rights – Mr Stavros Lambrinidis – visited the Dome Pillar 2 Self-Help Group (SHG) in Accra on July 5th, 2017. The visit formed part of activities planned by the EU Mission in Ghana when the Ambassador visited the country for official duties from 4th to 6th July, 2017. The Dome Pillar 2 SHG is one of the oldest and most active peer support groups of people with mental illness and epilepsy in the Greater Accra Region having been formed by BasicNeeds-Ghana in 2003.

Mr Lambrinidis and his team were invited to sit in at the group’s meeting. The chairperson of the peer support group, Mr. Kwame Nkrumah, used the occasion to express the group’s gratitude to the European Union for all the support the group had received through BasicNeeds-Ghana. He also outlined some activities the group had embarked on to gain acceptance from the general public. He reported that there had been great improvements in public attitudes and behaviour towards people with mental illness and epilepsy in the community as a result of public awareness campaigns embarked on by BasicNeeds-Ghana and the SHG. Mr Nkrumah further added that a lot of benefits had accrued to the group and its members from its engagement with the District Assembly and other stakeholders. He attributed their success to the capacity building training BasicNeeds-Ghana had organised for them.

Members of the group also took turns to share their experiences with the Delegation. Rebecca, who is a carer of Juliana, said “I had to endure a lot of stigma when my child developed the illnesses. I had to even send her to my work place; she would be with me whilst I worked because no one was ready to help me take care of her at home, and it was exhausting. Meeting a member of the group marked the turning point for me. She advised me to join the group after hearing my ordeal and encouraged me to seek treatment for my daughter at the hospital. I took her advice and now my child is better.”